We’ve all been there: your idea is so great that you’re literally bursting at the seams wanting to launch it as soon as you can (maybe even today). Most of us feed on this excitement. But how do you know you’re making the right bet with your idea? Which bets does the success of your idea hinge on? These are your riskiest assumptions; they need to be tested. Whether you work for a small start-up or an existing large organization, validate your riskiest assumptions as quickly and cheaply as possible so you don’t waste valuable time and resources toiling away at something that likely will never work. But this is often harder than it sound. How to find your riskiest assumption? 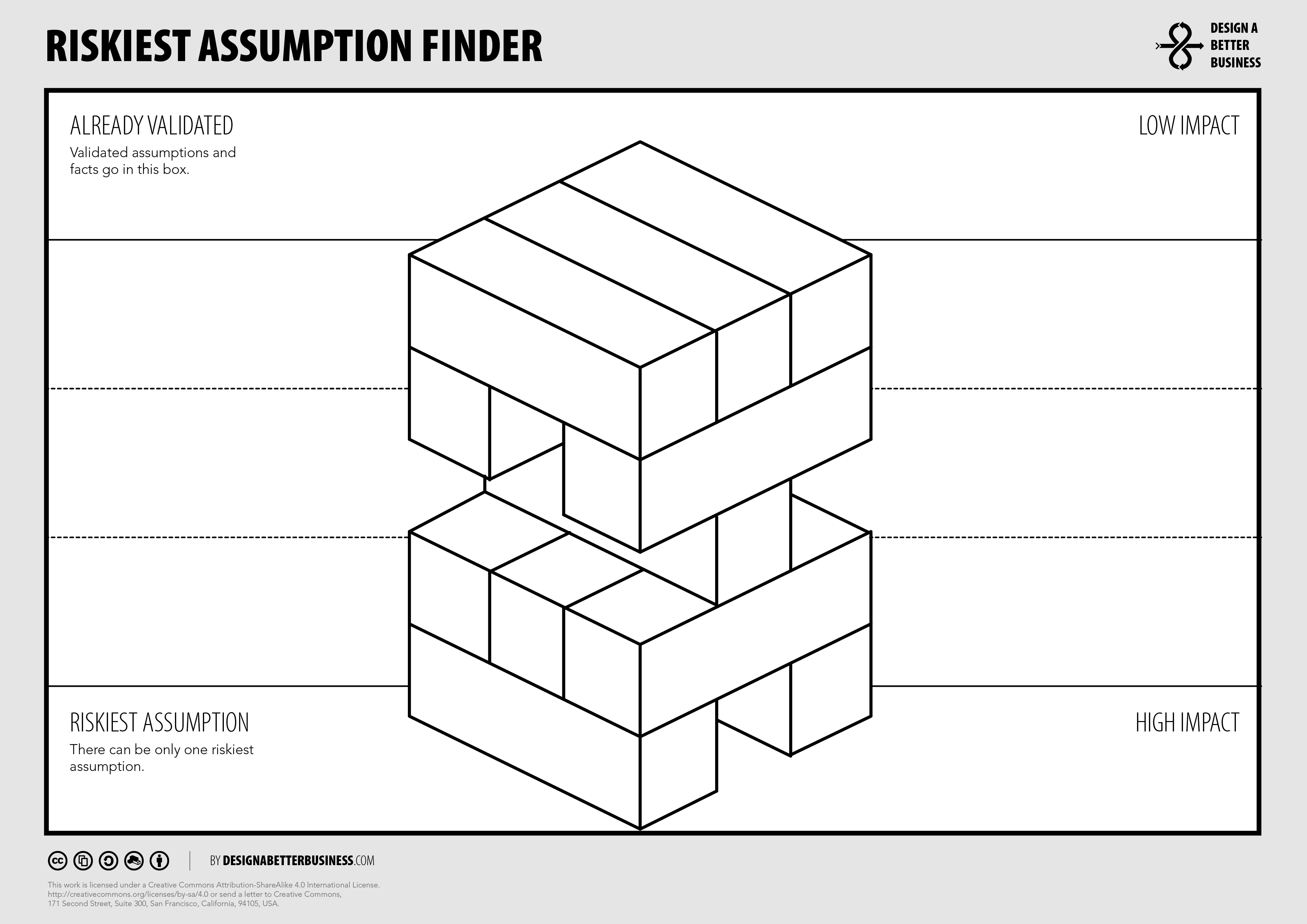 How To Use the Riskiest Assumption Canvas

In your stack of assumptions, the riskiest one is the first gate. If when testing this assumption it continually comes back as “false,” you don’t get to pass go, you don’t get to collect your $200. This tool will help you rank your assumptions before moving on to experimentation.

The first key to identifying your list of riskiest assumptions is to bring a team together to unpack the idea and brainstorm together. And, if you don’t have people on your team who have deep experience in unpacking the Business Model and Context, invite some industry experts from your network.

To identify the assumptions you have made about your business, have a look at other canvases you made, such as your Value Proposition Canvas, Business Model Canvas, Vision Canvas, Customer Journey, Persona, and Design Criteria. Each of these canvases contains untested assumptions. Especially the Business Model Canvas makes it easy to find assumptions, by looking at each of the building blocks and asking yourself: is this really true? The goal of this exercise is to sort these assumptions, and find the one riskiest assumption that underpins your idea. The one assumption that, if it is not valid, will make your idea come down like a Jenga® tower.

With your team in place, use your designer tools (sticky notes, markers, and a big wall) to rank these, based on which you could not do without or which are most likely to be false. The sooner you find these, the more likely you are to be able to validate them and either move forward or pivot.

Arrange for a comfortable environment. Definitely not a meeting room.

Finding the riskiest assumption is not always easy. Discussing assumptions with your team will help to identify the ones to go after. Do this visually so it’s to the point and provides you with the outcome you need! This tool makes it easy for your team to have meaningful discussions on what the riskiest assumption really is, and provides a way to come back to the discussion after validating.

Jenga® is a game where players in turn try to remove blocks from a wooden tower. Each block that’s pulled out may make the tower collapse, but the blocks on the bottom are critical to keeping the tower upright.

Think of your idea as a big tower, where all of the bricks are assumptions. When one of the assumptions on the bottom of the stack is invalidated, and the brick is removed, the entire tower may fall. When you remove one from the top, not much will happen.

To make our idea succeed, we need to make sure that the base of the tower is safe. We need to start at the bottom, with what we call the riskiest assumptions. At the moment, All the other assumptions are not as important. After all, if the riskiest assumption is incorrect, it may be totally irrelevant to think about any of the others: maybe your idea needs to change completely in the light of the new knowledge!

The goal is to try to make the tower fail fast! So check the bottom-most assumption first, which is the riskiest one. That’s what you’ll want to know more about. If it is right, you can move to the next riskiest assumption. But if it fails, your Jenga® tower falls, and you’ll need to go back to the drawing board to find another approach that works better.

What are your assumptions? What are the things you’re not sure about? With your team, start by just writing all your assumptions on sticky notes, but don’t stick them on yet. Refer to the war room and your point of view for inspiration.

Then, put the assumptions onto the template, each team member placing them in the middle 3 boxes, where they think it’s best. Don’t discuss yet!

Once all of the post-its are on the wall, each team member quickly goes over his or her post-its, and explains why they think they should be in the place they are.

Now, with your team, take turns moving sticky notes around. Try to find out which assumption is the riskiest one. Go over each post it, and see if everyone agrees that it is in the right spot. Remember: the assumptions that absolutely must be true for your idea to work go on the bottom of the stack. The ones that are less important or depend on other assumptions go higher up. Compare pairs of post-its to see which one has priority. When sticky notes move back and forth between boxes, put them halfway between.

Finally, go over each box and see if there are any assumptions in there that really depend on others (move them up) or that are fundamental (move them down). After about 15 minutes, you should have only a few left in the lowest box. Vote with your team as to which one you think is the most fundamental one.

Now that you have identified a riskiest assumption, try to describe what it means with your team. When is the assumption true? Does it depend on something else? How can you make it s.m.a.r.t.?

The Four Steps to the Epiphany (Steve Blank)

A free overview of 25 Validation Experiment Recipes from WRKSHP.tools.

This book stitches together a complete design journey from beginning to end in a way that you’ve likely never seen before.

Try the iOS App and have all 23 innovation tools in your pocket.

Sign up for the Design A Better Business Newsletter and keep up to date with events and news!